The beers brewed today at the abbey find their origin in traditions inherited from the original Val-Dieu monks. Historically, the Cistercian orders were known to be talented brewers. The monks of Val-Dieu were true to this reputation. The development of the brewing activity was initially linked to the need to make water drinkable and thus avoid such common diseases in those days as dysentery, cholera and typhoid.

For centuries, the monks studied yeasts and fermentation. They turned brewing into a science, creating special recipes which were every time more sophisticated. Today, beers brewed in Val-Dieu are inspired from the original recipes of the monks, loyal to the tradition of beers refermentation in the bottle. The beers are real original Belgian abbey beers, elaborated without the addition of flavorings nor spices and brewed according to the old infusion method.

The secrets of the brewery are its water and its yeast. Yeast is treasured in the abbey and propagated by them. Brewing yeast is composed of fungi (Saccharomyces cerevisiae) that are very beneficial to the human body and allowing the famous fermentations. This gives a beer that is rich in vitamin B and minerals and is a powerful antioxidant. Their production process lasts 6 to 8 weeks, in full respect of the original tradition. That is how they get this high alcohol content (6% for the Blond beer, 8% for the Brown one, 9% for the Triple) and these complex aromas that characterize the Val-Dieu beers.

The water comes from the Gileppe dam. This region has many water springs giving a water of excellent quality.  Some of those local springs are known worldwide such as Spa, Bru and Chaudfontaine, all located within 20-30 kilometers from Val-Dieu. 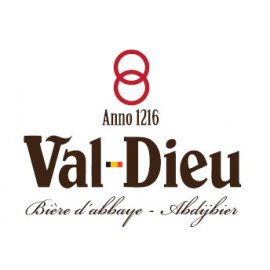